Hi! Today, I will be sharing my favourite quotes from the book “Tuesdays With Morrie”. I still can remember, it was one of the books I was assigned to read for an English class back in college and I honestly enjoyed it so much and probably one of the greatest books that I’ve ever read. However, it was very shocking for me to read some reviews and they were saying that the book was very sappy and boring. So obvious that they missed the message of the book. 😄✌

Tuesdays With Morrie is a non fiction novel by an American writer, broadcaster, columnist, musician, screenwriter and a best selling author Mitch Albom. The story was later adopted by Thomas Rickman into a TV movie of the same name directed by Mick Jackson. It tells the true story of sociologist Morrie Schwartz and his relationship to his students.

It was a heart warming story where the writer (Mitch Albom) became close to his professor (Morrie). He discovered after his graduation that Morrie was dying because of terminal illness ALS (Amyotrophic Lateral Sclerosis). He was surprised and saddened so he decided to visit his old professor every Tuesday. Morrie was like teaching Mitch with many great life lessons in general and they were able to build a beautiful friendship (like father and son) until Morrie’s death.

I am just so thankful to Mitch Albom for this book because reading it really inspires me to live life to the fullest. My favourite part was when Morrie was dying and he explained that we should make sure to get a chance to do all the things that we want before we die. The book was so inspiring as it covers all the major things in life that matters. So whether you’re young or old, you have to read Tuesdays With Morrie especially if you are going through loss. 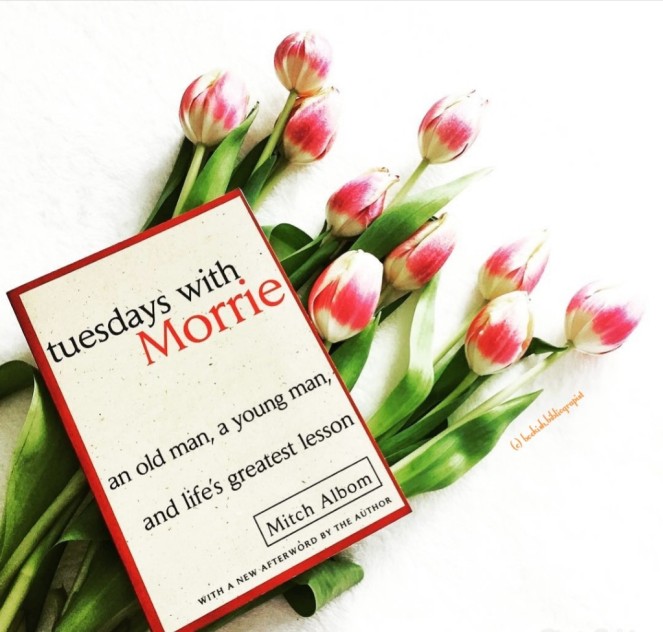 Okey, here are my 11 favourite quotes from the book:

1. “Death ends a life, not a relationship.

2. Forgive yourself before you die then forgive others.

4. “Learn to detach. Don’t cling to things, because everything is impermanent.”

6. “If you don’t have the support and love and caring and concern that you get from a family, you don’t have much at all. Love is so supremely important.”

10. “If you hold back on the emotions, if you don’t allow yourself to go all the way through them,you can never get to being detached, you’re too busy being afraid.”

11. “The most important thing in life is to learn how to give out love and to let it come in.”

That’s all for today. Which one did you like the most? Thank you for reading.

A girly girly who loves fine things and was born and raised in the Philippines. She's a major dog, nature, coffee and book lover. Stephen King, Cheryl Kirking, Sylvia Plath and John Grisham are her favorite authors. She's a twenty something, a promdi girl (promdi is a Filipino slang word which refer to someone who grew up in the province), a talker, a hopeless romantic, a writer wanna-be, she's in love with fashion, and a believer in turning ordinary moments to extraordinary ones. Her name is usually mispronounced, misspelled but her identity will never be misplaced. Her name is Yolly! So whether you're a follower, a new follower or you just happened to find yourself here, welcome welcome! Click away and enjoy!

This blog expresses the opinion of the author about the things she encounter in life. All product reviews posted on this blog are all based on the author’s experience. Take note that what works for her may not work for you. Thank you!